Holmes & Blacketts dust off their skis…

Holmes & Blacketts dust off their skis…

Holmes and Blacketts dust off their skis in Eucherts, La Rosiere.

Well, here we are at last on our first ever Holmes family skiing holiday! The boys commented last night at dinner that they were so pleased that at last we had taken the plunge and booked a ski holiday after years of rhetoric and no action! Now thanks to Mountain Beds who followed my brief to a tee (somewhere small and relaxed where I wouldn’t lose the children and no cool posers to make us feel self-conscious, good value, catered and near the slopes) they are predictably hooked as are Dominic and I after not skiing for over 25 years and even then, not hugely experienced!

We are here with my brother, Jamie and wife Sheri and son Ollie (21) who have had several holidays over the years but not for a while. Ralph (12) complete beginner, Freddie (15) skied 1 week before and Hector (17) skied 2 weeks before, are all attending ski school every morning while the other 5 of us have a fab private instructor from the ski school, Didier. He is just what we need to get us out of bed and bring our confidence back. Not sure we are looking quite the style he is trying to achieve but I think we are getting there and have plenty to put into practice in the afternoons! 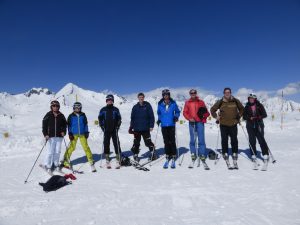 Only problem…..sad to admit to stereotyping the men in our party, they just want to go everywhere at what seems break neck speed and no chance for Sheri and I to put into practice our elegant shussing. First afternoon, we bowed to Ralph’s request to ski with his brothers and cousin after only a morning on the nursery slopes – terrifying as he headed off down every run at 100 mph snow plough. A few forays off piste and a few wipe outs but by the end of the day we had to declare “ by Jove, he’s got it!”

Second day, we headed over to Italy after ski school where the slopes are north facing – so better snow, as opposed to the south facing slopes of La Rosiere that can get a bit slushy in the afternoon. There are some great runs over there but means a steep red run down from the chair lift followed by longest button lift I have ever seen – which I managed to fall off half way up! I was rather hopeful that one of those snowmobiles with a hunky driver would sweep down and pick me up but frustratingly, I had to walk up the rest of it to the top. Great annoyance from my sons at having to wait for me and couldn’t believe I could be so stupid but it was a good point at which to break into 2 parties – girls and boys! Sheri and I have discovered some lovely authentic Italian bars with yummy hot choc which is solid melted chocolate and some great motorway runs and the boys have challenged themselves on the few blacks they can find and covered large area of runs in both Italy and France.

Lunches, we make and take with us and eat surreptitiously outside a bar having bought beers and some bowls of chips to share – whenever a waiter scouts around, we grab a chip very obviously and haven’t yet been chucked out!

The boys are now all looking really good and it has been worth them sticking to ski school despite Hector and Freddie finding the adults in their group a bit restricting and Ralph annoyed at having to stay on nursery slopes for first couple of days but he was soon moved up a class and now doing parallel turns and looking better than the rest of us! It hasn’t been hugely cool for Ollie to ski in the mornings with his parents and aunt and uncle but good for his skiing as it is ironing out bad habits and he still looks cool and having unpicked all our bad habits, we seem to be similar standards although I am the only one with a big black bruise on each cheek…not on my face after I skiied straight into Ollie and took him out. When Jamie took Sheri out, Didier produced his medicine – Genepi – a local speciality a bit like green chartreuse which he says the ski bums make when they have nothing else to do all summer! Instant remedy! 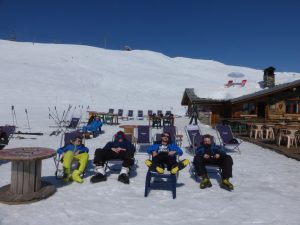 The boys have been out a couple of nights after we have settled into bed to discover the night life which resulted in Didier having to ask Ollie one morning if he was “ung oovair!”

Fog and midweek lethargy which Didier said was normal, gave most of us an excuse for an afternoon off on weds but no rest for Dominic and uncle Jamie who were dragged out by Ralph for an afternoon on the slopes – the fog cleared and they had an afternoon of great skiing on fab snow, on empty slopes – that’ll teach the rest of us! We’ll have to work hard for rest of the week to make up for skiving! 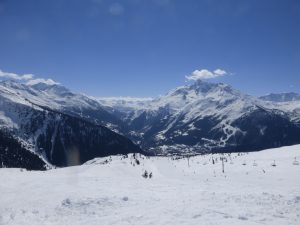 Have to mention the comfortable chalet to ourselves – apartment really – which sleeps 8 with amazing views – and we have very helpful Andie looking after us and cooking yummy breakfast, tea and 3 course dinner with unlimited wine – all this typing is making me peckish for another scrumptious flapjack! Her cakes are to die for and haven’t hung around!

Wednesday was Andie’s day off so she booked us a table at a very authentic Savoyarde restaurant called Les Marmottes. We had a fondue to start then yummy main courses but the servings were so large that we were defeated so tip for future is to have either fondue or main but not both! The walk to La Rosiere is like a trip to Narnia along a snowy wooded track with lampposts along the way. Ralph was dead beat after his exertions and none of the rests we had all had and he and I managed to find a free minibus to drop us right outside our chalet! The other boys headed out for some apres ski and were heard returning at 3.30am – all a little quiet at lunchtime, having miraculously made it to ski school and only coke for lunch instead of the usual beers. 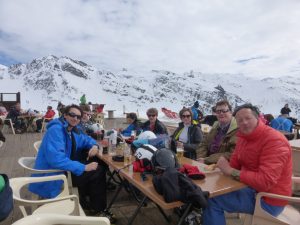 Yesterday we lunched at the much better value bar at the Fort at the head of the San Bernard pass – very historic – Hannibal brought his ellies through and Napolean his armies and the fort would have been a key position in both world wars with France and Italy on opposing sides. Very welcome vin chaud as quite chilly at the top! We skiied from there to La Rosiere to spend a while sitting in the sun on the pistes watching a ski acrobatic jumping competition.

I have opted for a day off as I’ve annoyingly got a raging temperature and chesty cough which required a trip to Dr Nawi for some antibiotics – yet another amazing service from Melissa who happened to know the doctor here. He is charming – the only doctor in the region and has been here 37 years so hugely experienced.

Sounds like I opted for the best day to rest – everyone headed off for a final long day, skipping ski school to have some fun in Italy but have just heard that they have already had 2 restaurant stops, weather is horrid and ski lifts shut. It is snowing lightly down here in the village so probably good snow up the pistes for next week’s skiiers! Lucky chaps! 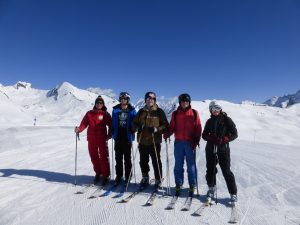